My dog suddenly became unsteady on his feet, almost as though he was drunk. He was diagnosed him ataxia. What is that? 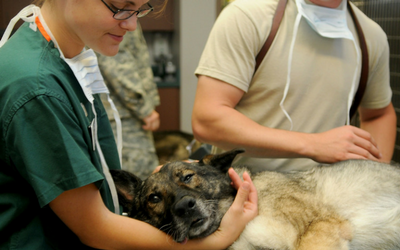 The word ataxia means incoordination within the nervous system. The abnormal movement can occur in the legs, the head, the torso, or all three.

"There are several different forms of ataxia, depending on where in the nervous system the abnormality occurs."

The second type of ataxia occurs as a result of abnormal function of the inner ear or brainstem that causes a disruption in balance. This type of ataxia is called a vestibular abnormality, or vestibular syndrome.

Finally, the third source of ataxia is localized to the cerebellum, the part of the brain where fine motor movement is coordinated. These dogs often look normal at rest, but when they start to move, their limb movements can be quite exaggerated and they typically also have head tremors.

What are some distinguishing characteristics of the various types of ataxia?

The most common sign of ataxia, regardless of the cause, is an abnormal gait in which the dog is very unsteady on his feet. With a spinal cord lesion, the toes may drag on the ground as the dog walks, wearing off the ends of the toenails. With a vestibular disorder, it is also common to see abnormal movement of the eyes, typically drifting from side to side. Dogs will often stand with their feet wide apart in an effort to stay upright. They may generally have a head tilt toward the side of the lesion in vestibular syndrome. Also, with vestibular syndrome, the dog may actually be unable to stand and may roll toward the side of the lesion, sometimes rolling completely over time and time again. If the ataxia is caused by a lesion in the cerebellum, the dog will walk with an exaggerated “goose-stepping” gait, called hypermetria.

There are potentially many different causes of ataxia, depending on where the problem is located. Spinal cord problems causing ataxia:

What kinds of treatments are used for dogs experiencing ataxia?

Treatment of ataxia will be influenced by the root cause. Pain management, supportive care, and making the environment safe (e.g., preventing access to stairs) are cornerstones of ataxia treatment. Regular reassessments will be scheduled in order to monitor the progress of recovery. Some causes of ataxia cannot be cured, and these dogs typically experience clinical signs that progress and may eventually result in the need for euthanasia.

© Copyright 2020 LifeLearn Inc. Used and/or modified with permission under license.